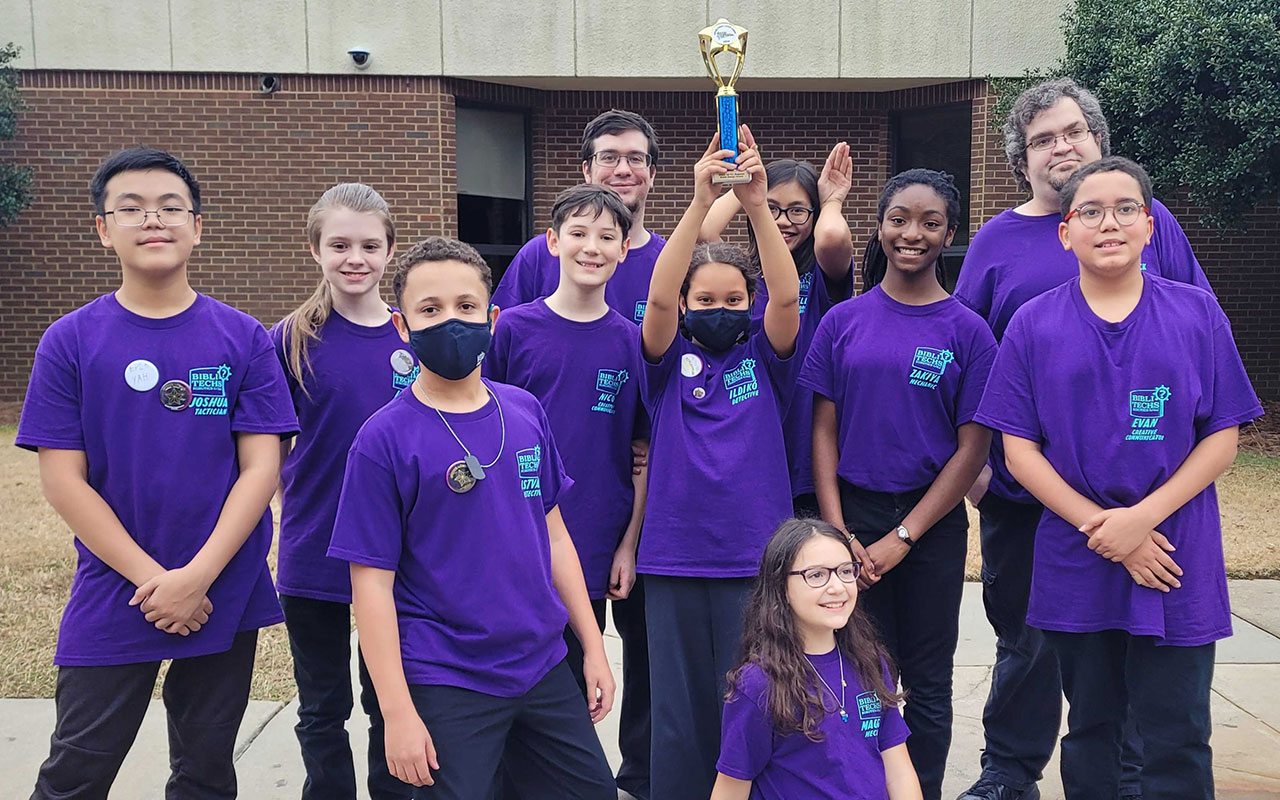 The request came on the heels of the library program conducted by City of Peachtree Corners Communications Director Louis Svehla in July, which provided Peachtree Corners Library staff with tours of the Curiosity Lab as well as an in-library presentation to the facilities youth members. .

The reason for the request?  Every year FLL teams across the world are challenged to find real-world problems and create innovative real-world solutions to those problems.  So, what better thing to do than tour the Curiosity Lab and immerse the students in real-life technology?

Svehla conducted tours for the coaches on September 14th, and the full BiblioTech team on September 30th.  Following the tours, the students began developing ideas for their FLL competition based on the technology they had seen and narrowed down their ideas to three topics.  On November 9th, the team visited the Curiosity Lab and met with Svehla to discuss their ideas and determine a final competition project.

Following the discussion, the team landed on a project entitled the Seeking and Tracking AR Wearable Vegetation Management System, or STAR Wear VMS.  The project focuses on creating an environment to assist utility workers by providing an increased vision of potential hazards in the power grid.  The team worked for weeks to prepare for their first round of the competition which was held on Saturday, December 10th.  The competition included the presentation of the project, as well as the creation of Lego robotics that the team used in the Robot Games competition.

“It is so amazing to watch how these students took the things they saw at Curiosity Lab and used them to create such an amazing and innovative project,” said Svehla.  “I cannot begin to explain how proud we are of these students and how honored we are to be part of their program.”

STAR Wear VMS is a new databasing and augmented reality (AR) system that can find and track issues for utility companies. It connects drones with light detection and ranging technology (LIDAR) to map out and track issues along power lines and around green electrical boxes.  Drones routinely fly in pre-mapped areas and update a tracking system that is used by utility workers to repair any issues.  When issues arise, such as power outages, the drones are used to send information back to headquarters quickly and efficiently.

On the ground, linemen and other workers can connect to the system using wi-fi connected AR glasses and peripherals to view information about poles, vegetation, underground infrastructure, and issue management.  The system provides easy calculations, instructional information, and markers to the workers. Real-time data is uploaded to the system for supervisors and leadership to view, consider, and strategize. The technology creates a loop that ultimately helps workers identify, seek, track, respond to, and repair issues.

“The kids had a ton of fun, and the competition was a huge success,” said Sturgill.  “As a result of their presentation and robot competition, the BiblioTech team won the Robot Design Award and a spot in the second round of the competition on January 28th at Trickum Middle School.  We thank the City and Curiosity Lab for welcoming us and supporting our students.”

The City of Peachtree Corners and Curiosity Lab are proud to support the BiblioTechs and look forward to watching their future success as they move on to the second round.