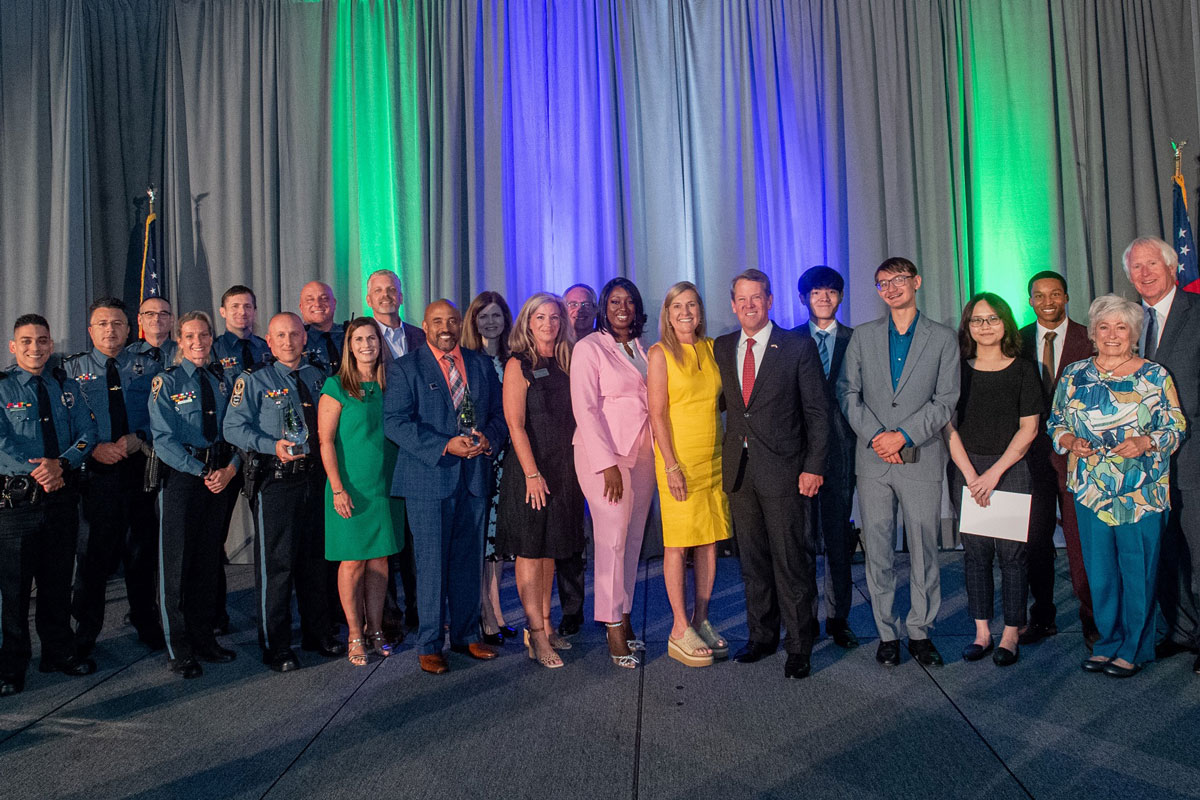 A 14-year tradition for eco-focused nonprofit, Gwinnett Clean & Beautiful (GC&B) was realized on August 12. 400 community, business, educational and environmental leaders packed the Convention Center at Gas South District to hear Governor Brian Kemp’s thoughts on the state of the environment in Georgia. In addition to a speech from Georgia’s 83rd Governor, attendees were treated to a rousing rendition of the National Anthem from Gwinnett Police Department MPO Dustin Martin-Young, the awarding of several scholarships to up-and-coming environmental stewards, and the presentation of the 2022 ECoS (Environmental Consciousness and Stewardship) Awards.

Introduced by Gwinnett County Board of Commissioners Chairwoman, Nicole Love Hendrickson, Governor Kemp spoke to the fact that Georgia has emerged from the pandemic, even stronger than before – setting new records for job growth and economic development. With 51,332 jobs and $21B in investments on the horizon, he asserted his belief that Georgia is the best state to work, live and raise a family. The governor insisted that – even though Georgia, Metro Atlanta and Gwinnett have been heralded for their efforts with a number of accolades – it’s important not to rest on their collective laurels. With quality of life – spanning from the North Georgia mountains to the Golden Isles – as one of Georgia’s greatest appeals, Kemp pointed to investments in state parks, as well as water and air quality infrastructure.

Highlighting its impact on economic growth, Kemp believes the state of Georgia’s environment makes the state attractive to a growing number of companies. Recognized as a national leader in the Electric Vehicle (EV) industry and designated as #3 in the country for environmental sustainability by Site Selection Magazine, Georgia has gained the attention of companies like Rivian and Hyundai Motor Group. Late last year, Rivian announced the expansion of its manufacturing operations with the opening of a second plant in Georgia – with a $5-billion site east of Atlanta in Morgan and Walton Counties – set to create 7,500 jobs. In May 2022, Hyundai announced a $5.54 billion investment in the opening of its first state-of-the-art U.S. smart factory in Bryan County – delivering an estimated 8,100 new jobs to Georgia’s coastal region. The creation of the Georgia Electric Mobility and Innovation Alliance (EMIA) in July 2021 will continue to pave the way for electric mobility infrastructure in the state.

“We were so honored to have Governor Brian Kemp, First Lady Marty Kemp, their daughter Lucy and members of his office staff join us for the 14th Environmental Address,” said Schelly Marlatt, Executive Director of Gwinnett Clean & Beautiful. “This was his second time before the GC&B podium, and he did not disappoint. His speech was 15 pages long – that’s 15 pages of amazing strides being made in Gwinnett County and throughout the state of Georgia. By the time he was done, every guest in that room was swelling with collective pride over the accomplishments that have been made and those yet to come. Before he was an elected official, he was an Agriculture grad from the University of Georgia and an entrepreneur. He connected with our audience on so many levels, and he has a deep understanding of the environment’s role in economic success. We applaud the advances he and his administration are making on behalf of the environment and the people of Georgia.”

To round out the event, a number of scholarships were presented to recent high school graduates and Georgia Gwinnett College students. GGC’s Brian Land and Ngoc Lan Thanh Le were each awarded $2,500 scholarships from Gwinnett Clean & Beautiful, and former Green Youth Advisory Council members – Daniel Jung and Logan Zimmerman – were each awarded $2,000 Gwinnett Clean & Beautiful Jim Steele Environmental Education Scholarships. The winners of the 2022 ECoS Awards were also announced:

The next events on Gwinnett Clean & Beautiful’s calendar are the Yellow River Trash Bash on Saturday, September 10, Great Days of Service in late October, and  America Recycles Day at Coolray Field on Saturday, November 5. To learn more about these and other upcoming events, concerned citizens and environmental stewards are encouraged to visit www.GwinnettCB.org.